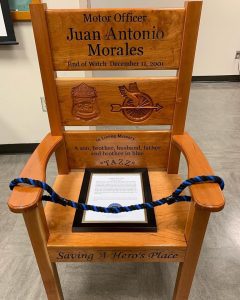 Officer Morales was struck and killed by a hit-and-run driver while driving to work on his department motorcycle.

A vehicle sideswiped his motorcycle, causing him to be thrown to the ground. The driver fled the scene. A citizen followed the driver and observed him switching cars. The citizen continued to follow the driver, who was later apprehended.