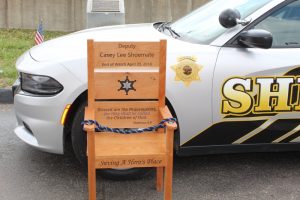 Deputy Shoemate was killed in a vehicle crash while responding to a structure fire at a fellow employee’s house. He collided head-on with an oncoming vehicle during the response. Deputy Shoemate was pronounced dead at the scene. The other driver was flown to a local hospital in serious condition